As I posted about a year ago after the DSCC Sebring lunch trip, I finally felt that I had to do something about the fact that with the Nitto street tires with a wear rating of over 360 or so will spin the tires at about any speed in any gear including OD that I needed a sticky tire to help that.
So I have decided to get a set of tires with a 200 wear rating to use on the street and also track days at Daytona as the Nitto NT01's that I have been running have a fair about of graining across the tread.
As there is a class in SCCA that requires the 200 rating for tires I posted a question on the CFR Scca Facebook site as to what tires were working for them.
I got a few answers...have to admit that not as many as I expected by asking what tires someone likes. Hankook came up a couple of times and Falken, and a couple of others.
BUT there is always a but, after looking at them and they do look like they are really good tires, NONE of them have much of any tires bigger than the high 200's tread width. As I need 315/35/17 for the rears I was hitting a solid wall.
I have no real loyalty to NITTO and one member stated he ran the NT05 for a while but liked one of the others better it turns out that Nitto is about the only brand that makes 200 wear tires in the 315 size.
And to add the the hard choices, Nitto seems to have dropped the 245/45/17 size that I use for the front.
SO after much research and math to convert mm to in. and they do make a 255/40/17 that is just short of 3/4" less diameter. The 245 tires just barely rub the inner wheel wells at full lock and compression so I have ordered the 255/40. This will lower the car about 1/4" and should not hit the wheel wells.
Seems like every part of my car is tweaked to the point that one change anywhere will show up somewhere else. So I will probably scrape the road somewhere that I'm not touching now but this is the best that I can do.

The sad part is that I bought the street Nittos because they were cheap and I figured that I would burn them off quickly. But it has been 10,000 miles and several track days and they really don't show any wear....they are really hard...lol
Tom has run the NT05 on his cobra and they seem to do the street ok on wearing out so I'll be giving them a try and maybe post a result at a later time.

then post the day here.....I want to see someone else's name on the postings other than mine.....I already know what mine say.

Been running the NT05s for years. On the street they are OK. On the track they are nowhere near the slicks. Just sayin'

No I don’t expect them to be that good. I still have a couple of track days left on my NT01’s. Mostly I’m looking for more street grip. I hope to use the 05’s at Daytona on the 30th to see how much difference there is.
I think I’ve reached my top speed limit (mine not the car) so I’m going to focus on the twisty bits.
Top

New shoes are here....everything looks good with new shoes on.
Now on to the tire machine and go to work. 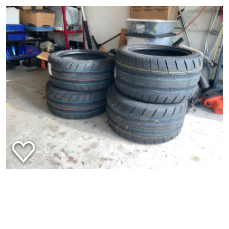